I think I had just decided to study to be a yoga teacher and my mother sent me a handful of Yoga Journals she had been saving. This article blew me away: it outlined 4 people whose lives were in dire straights, and through yoga, found their way to a more peaceful existence on this rough planet.

My favorite story was about wrongly-convicted Sunny Jacobs. It hit me so hard. Here was a woman who had so many years just stolen right from her hands and has every reason to be bitter, angry, and hateful. I couldn’t picture myself handling 5 years on death row with literally zero conversations with another human.

Now Sunny is a yoga teacher, has had a play written about her, and has been sponsored by Amnesty International to speak about her experience.

Here is a small excerpt of that larger story… 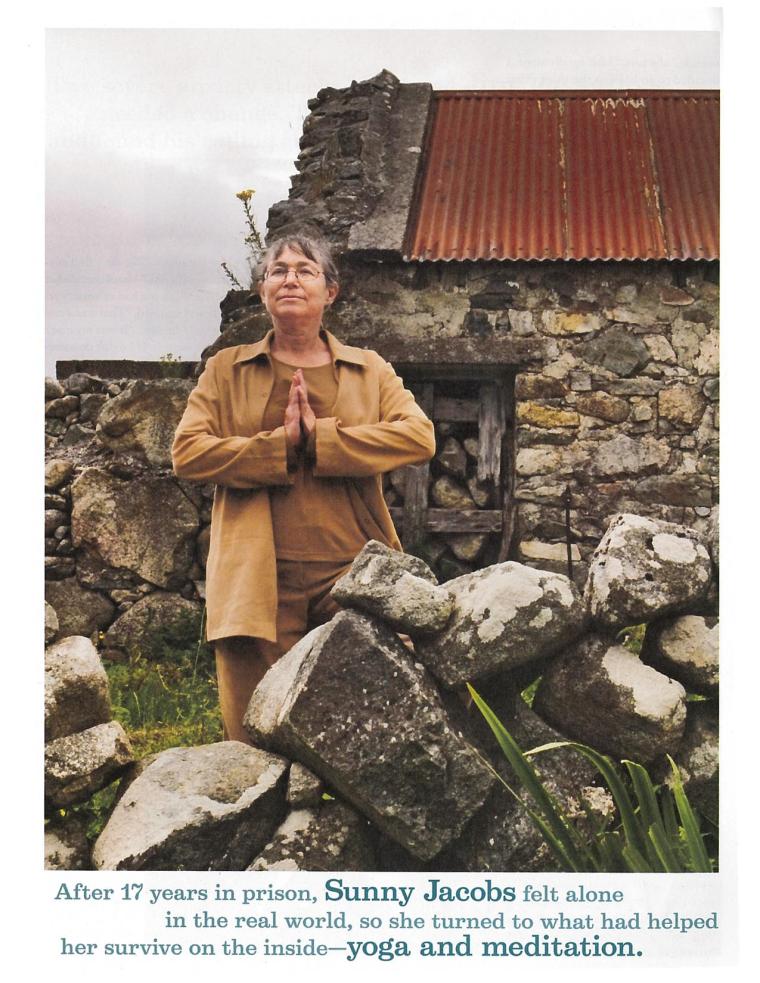 Shanti Sehi remebers the woman in the back. Sehi was in introducing a yoga class to inmates at the Broward Correctional Institution in Pembroke Pines, Fa. This was in the mid-1980’s, before yoga became part of the mainstream; the idea of a yoga program for convicts was controversial. Sehi wasn’t sure what she’d find or how well it would go over.

For some reason, the woman in the back of the room caught her eye. ‘She had dark glasses on,’ Sehi recalls. ‘I wasn’t sure if she was even listening to me.’ But when the class of beginners began to practice their asanas, this woman ‘did absolutely beautiful poses. I was shocked.’

Her name was Sonia Jacobs. In 1976, she, her partner, Jesse Tafero, and his friend Walter Rhodes were charged with murdering two police officers at a rest stop on I-95, then stealing one of the dead officers’ cars, before they were chased down by police. Although she was essentially just a passenger, Jacobs — the mother of two small children, both of whom were in the car at the time of the shooting — was sentenced to death. In 1981, the sentence was overturned by the Florida Supreme Court for one of life imprisonment. Tafero, however, was executed in 1990.

While on death row, Jacobs began to practice the half-dozen basic postures she had learned years earlier while watching Lilias, Yoga and You on television. She did her rudimentary practice, she says, to stay sane. ‘I wasn’t doing postures for the sake of it.

I was doing them in order to get beyond the emotions, thoughts, and physical aspects that were blocking my access to the part of me no one can lock up in a cage.’

Her release came in 1992, when the US Circuit Court of Appeals overturned her conviction. But leaving the structure of prison life after 17 years was jarring for Jacobs, who was 45 years old by the. ‘You have nothing in common with the people outside,’ she says. ‘I felt totally alone. I decided to go back to the things that helped me survive in prison, which were yoga and meditation.’

[ Sonia became “Sunny” and moved to Ireland and now works with prisoners, people with disabilities, girls sold into slavery, and child soldiers. ]

‘I work on the fringe of the world. I teach the broken, the aged, the incarcerated, the traumatized.’

And through her teaching, she spreads a message of forgiveness. ‘Love is the answer and healing is the way,’ she says. ‘Yoga and meditation will help you reach that.’