Far from a reference to this season’s slew of college graduations, this picture well represents the chaos I feel when thinking about formal education. 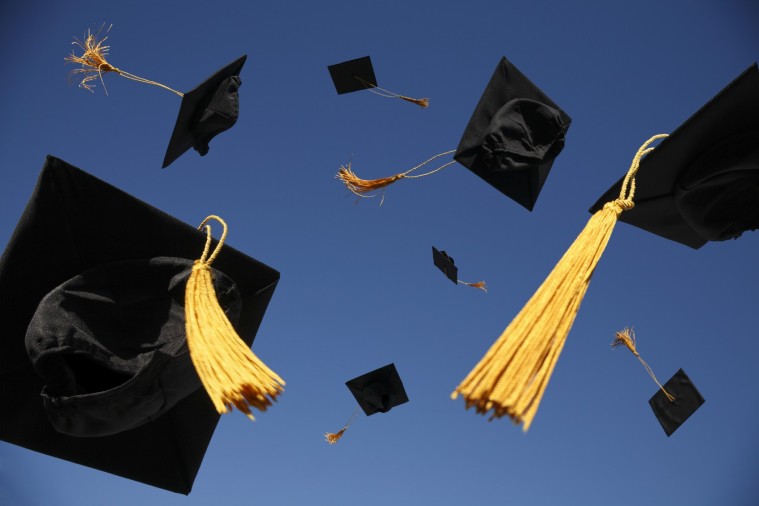 In high school,  I was smart– in that I got good grades. I was also smart in that inconvenient way that I questioned authority. I was always raising my hand in class to contradict my teachers–and that went well. I got suspended for building the set for a play unsupervised. I was an all-around charming teenage anarchist, like a lot of us are.

I went to college desperately wanting to learn how to be an adult. But college is really good at teaching you how to be a more destructive kid in a more homogeneous community. The hierarchy of age is still enforced, if less cruelly, certainly more overtly. I had no interest in ice-cream socials, formals, semi-formals or clubs. School spirit was as lost on me. No matter what my future goals, I was sure they did not include a paper-writing seminar, a biology class, or more Spanish classes.

And the concept of Greek life? Don’t get me started. It befuddled and confused me to no end. 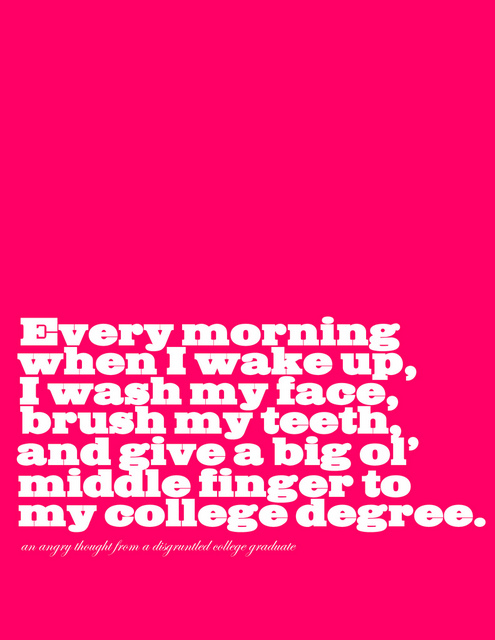 But college is where you go if you’re smart, right? Getting a degree is how you get a good job, right? So I went. And every year -nay, every semester- I went back to college, I had the feeling of a bride walking down the aisle, knowing her marriage would be a mistake, but feeling like she has no other choice. I didn’t know what I would do if I wasn’t in college. (The closest I came was a plan to sell up-cycled clothes, buy a van and move to Southern California, and that sounded about as stupid to me then as it does now.)

And then suddenly I wasn’t in college. Four years were up. And I had spent four years learning how to stay a kid and how to ignore my own instincts about what was right for me. It’s a rocky path back from ignoring your own instincts, let me tell you.

My one solid skill for bread-winning was one I learned outside of school: waiting tables. I longed to have gone to the tech high school and have a skill, instead of the college-prep track. My love for learning drained out of me. I didn’t read a book for years, and I read The Fountainhead for fun when I was 16.

Of course, I did come out of school with a degree and some fun experiences.

Those were all worthwhile experiences, but I’m not sure I had to go to do a thing as specific as COLLEGE to get them.

My dad (yup, the guy who -along with Ma- sent me to college) recently directed me to this essay by Bill Bonner. I was floored (not by my dad’s thoughtfulness, ’cause he’s always thoughtful) but because there are people out there in the world thinking the same secret thoughts I have about college. The best quote from the article…

That is why more education does not always lead to more success in the real world. In fact, it could go in the opposite direction. The better you get at handling the artificial world of academia, the worse you may do at solving the real world’s infinitely nuanced challenges. 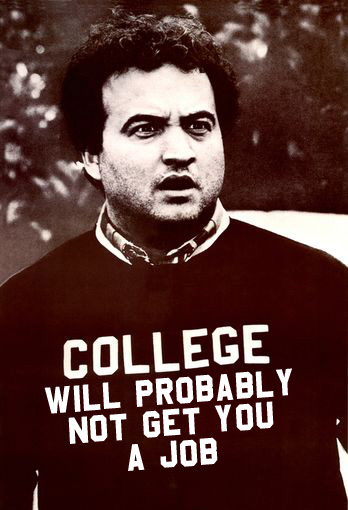 College is not for everyone. And I don’t say that in the cruel tone guidance counselors use.

College may not be the most fulfilling choice for everyone would be a better way to say it. I wish someone had said that to me, but my parents and I, we just didn’t know. It felt wrong, it felt weird, but we did it anyway.

So this is where I lay into my yoga point (and thanks for sticking with me):

if it feels weird and wrong, you don’t have to do it.

Compromising to live in society with other humans rather than being a crazy old hermit monk on a mountain is admirable, but it has its ways of getting into our heads and making it hard for us to listen to our internal compasses.

So dolls, listen to your internal compass, always.

In yoga class, in educational decisions, in relationships. Don’t do anything because that is what you’re “supposed to do.” Ever. Evereverevereverever. Live your life from love, excitement, and kindness, but never that fuzzy, unsatisfying place called “supposed to.”

3 thoughts on “The case against college”